An Excursion to Estes Park 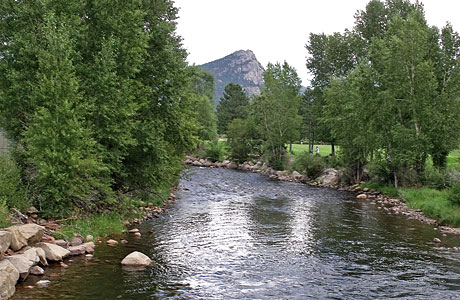 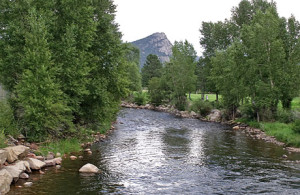 As twenty four people boarded the van, I couldn’t help recall my first trip to Estes Park. It was a business trip made in May of 1976. I immediately fell in love with the town, the people, the scenery, and of course Rocky Mountain National Park. My girlfriend, who was just embarking on a photography career,and I spent almost every weekend that summer visiting Estes Park. We played golf and tennis in the valley, and walked and hiked more trails than you can imagine. I can’t even guess how many photographs she took that summer during our drives and walks through the Rocky Mountain National Park and a various other locations we stumbled upon. And remember all cameras used film back in those days. You only had 24 or 36photographic opportunities before a reload was necessary.With a lot offond memories, I was excited about the prospect of seeing Estes Park once again. 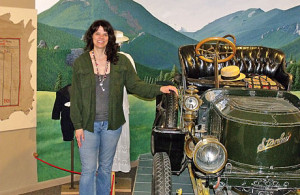 Our first stop was at the Senior Community Center for a buffet breakfast. Volunteers from the center prepared and served the food and drinks and kept everything moving nicely considering how many people attended the breakfast. I also noticed that everyone had a smile on their face. It might have something to do with living in Estes Park. After the breakfast we walked next door to visit the Estes Park Museum. Incredibly, I could not recall having visited the museum previously. The museum described the founding of Estes Park back in 1859 by a man named Jim Estes. He lived off the land by hunting and fishing. Eventually more and more people found their way into Estes Park, making the area too crowded for Estes’ liking. He eventually sold his stake for a wagon and a couple of horses. All I can say is WOW! 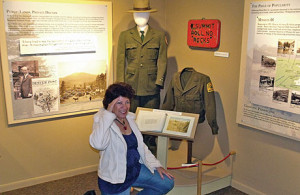 One of the other attractions of the museum was a vintage Stanley Steemer automobile. The auto stands in front ofa mural of the Stanley Hotel. If you enjoy vintage automobiles, make sure you stop inthe museum on your next trip to Estes. The auto and the otherdisplays made the visit most enjoyable.
While at the museum, I buddied up with Rose and her daughter Raquel. After the museum we had a couple of hours to do as we pleased. I noticed that there were shuttles available to the Stanley Hotel, Mary’s Lake, The YMCA of the Rockies, Lake Estesand numerous other sights in thearea. We all decided to go sightseeing rather than shopping in the village.It was great to retrace many of the places previously visited. The biggest difference wasnow seeing how many more homes and condos had been built in and around the area.

After our little excursion it was time to head to our vans for the return trip to Denver. Although our drivers had requested that we all be back by 2:00 p.m. for the return trip, wewere somewhat astonished to find that one ofour van drivers was not yet there. NowI don’t want to throw anyone under the van, but I will say it wasn’t De. The other driver had missed the shuttle which wouldhave had herarrive on time. Since the shuttle arrives every twenty minutes, it isn’t too difficult to figure how long she kept everyone waiting. On a positive note, she did receive a round of applause once she finally boarded the van. Who says seniors don’t have a sense of humor?