An Evening with Lily Tomlin 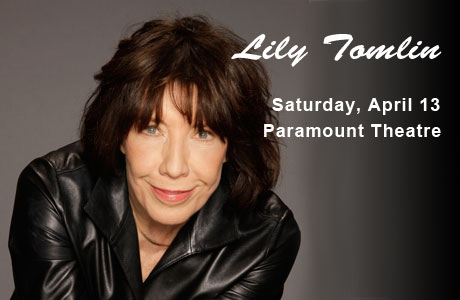 The career of multi-talented performer Lily Tomlin spans comedy, stage, television, film, writing and producing.  Inspired by early comic pioneers like Lucille Ball, Bea Lillie, Imogene Coca, and Jean Carroll, Tomlin left college to pursue her dream and fine-tune her craft starting in local coffee houses, then moving on to New York landmark clubs, building along the way a strong following.  In 1966 she made her television debut on The Garry Moore Show, and The Merv Griffin Show, before joining, in 1969, the top-rated cast of Laugh-In where she rose to national prominence with her characterizations of Ernestine, the irascible telephone operator, and Edith Ann, the devilish six-year-old.  She went on to co-write and star in six comedy television specials, and has guest-starred in numerous television shows including Homicide, X-Files, Will and Grace, Murphy Brown, and The West Wing and her new show Malibu Country.  1977 brought Tomlin to Broadway with Appearing Nitely. In 1985, Tomlin appeared in Jane Wagner’s critically-acclaimed play, The Search for Signs of Intelligent Life in the Universe.

In 1975, Tomlin made her movie debut in Nashville.  She has also appeared in  9 to 5, The Incredible Shrinking Woman, All of Me,  Shadows and Fog, Short Cuts, The Beverly Hillbillies, The Player, Flirting With Disaster, Away with Murder, Krippendorf’s Tribe, Orange County, I Heart Huckabee’s, A Prairie Home Companion, and Pink Panther II.  Some of her numerous honors include: six Emmys, two Tony Awards, two Peabody Awards, a Grammy, and the prestigious Mark Twain Prize for American Humor.

This is a benefit for CPT12 and is sponsored by KOSI-FM, Out Front Colorado, Prime Time for Seniors, 50plus Marketplace News, Westin Denver Downtown, and Presidential Worldwide Transportation.

Lily Tomlin, one of America’s foremost comediennes, continues to make rare appearances around the Nation and will be coming to Denver to perform on Saturday, April 13, at The Paramount Theatre. Tickets are $45, $65 & $85 plus service charges and available at www.tickethorse.com or by calling 866-461-6556.