An Evening With American Music Icon Herb Alpert at The Robert and Judi Newman Center for the Performing Arts at DU on Wednesday, September 25th 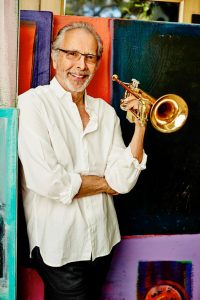 Herb Alpert has found himself in the right place at the right time so often that he feels inspired to add more creativity, art and uplifting feeling to the world. At the age of 84, he wakes up every morning thinking about what he’s going to sculpt, paint or play on his trumpet. And he continues to perform. Why? Because he still loves it! Lucky for us, The Newman Center is on his concert tour.

Speaking of luck and timing, the record company that Alpert started in his garage in 1962 with his friend Jerry Moss with an investment of $100 each went on to become what is widely believed to be the most successful independent label in history – A & M Records, from the first letter of their last names. Alpert and Moss sold it in 1989 to Polygram Records for half a billion dollars. Before starting A & M Records, Alpert wrote songs with his friend Lou Adler. They penned Sam Cooke’s big hit, “Wonderful World.” Alpert learned from Cooke to listen for the feeling in the music.

Alpert found that feeling when he was at a bullfight in Tijuana, Mexico, and felt the excitement in the crowd that was stirred by the fanfare of the mariachi brass band. He was inspired. He wanted to capture that energy and sound. When he got home, he played with layering recordings of his trumpet in his garage studio. It felt good. It felt right. The resulting song, “The Lonely Bull” took off like a rocket, and The Tijuana Brass was born.

And what a success story it was. Herb Alpert & The Tijuana Brass sold over 72 million records with 5 #1 Hits, 15 Gold Records and 14 Platinum Albums.  A & M Records went on to record artists like Quincy Jones, Liza Minnelli, Janet Jackson, Cat Stevens, The Carpenters, Police, Sting and Sérgio Mendes and Brasil ’66.

It was when the band Sérgio Mendes and Brasil ’66 showed up at A & M Records with their 19 year old lead singer Lani Hall that Herb and Lani met. Brasil ’66 became the opening act for The Tijuana Brass. Lani Hall’s beautiful emotional vocals propelled Brasil ’66 to international stardom.

The music was great, the success was thrilling and so was the love story as Herb and Lani found their way into each other’s hearts. Herb Alpert and Lani Hall have been married for 45 years.

Herb Alpert is the only recording artist in history to have both a number one hit as a singer and as an instrumentalist.  He bumped Simon & Garfunkel’s “Mrs. Robinson” out of the number one spot with his rendition of Burt Bacharach and Hal David’s “This Guy’s In Love With You” in 1968. With the success of that hit, Herb asked the songwriters if they had another song for him. They did, but when Karen Carpenter came along, Alpert gave it to her. The song was “Close to You.”

Herb Alpert has earned 9 Grammy Awards. In 2017, Alpert was nominated for another Grammy. Billboard listed Herb Alpert as #7 on their Greatest Of All Time Billboard 200 Artists. In 2006 Herb Alpert and Jerry Moss were inducted into the Rock and Roll Hall of Fame. In 2013 Alpert was awarded the National Medal of Honor for the Arts by President Obama.

Herb Alpert and Lani Hall are philanthropists who have contributed tens of millions of dollars to the arts and education through The Herb Alpert Foundation. They saved Harlem School of the Arts which was founded in 1964 by the soprano Dorothy Maynor. In 2010, when Herb Alpert read in a newspaper article that Harlem School of the Arts was going to close it’s doors, he felt strongly that he couldn’t let that happen. So Alpert arranged for a donation of $10 million which enabled them to stay open. This August the school, which is now thriving, is beginning a $9.5 million renovation funded by The Herb Alpert Foundation.

Herb Alpert feels that it’s important for kids to experience creative expression at an early age because if they experience their own uniqueness they can appreciate the uniqueness of others, and get in touch with their humanity. And learning a musical instrument requires practice and thinking which prepares them for academics.

At the Newman Center concert, Herb will be joined by fabulous musicians who have been with him for over twelve years, Bill Cantos on piano and vocals, Hussain Jiffry on 6 string bass and Michael Shapiro on drums. Together they perform legendary classics from The Tijuana Brass and other audience favorites as well as musical surprises that showcase the jazz roots and talent of the ensemble. The performance also includes a multi-media experience with a large screen displaying classic moments and rare footage from Herb Alpert’s long career.

“I like to make uplifting music. I get energy from a concert. I have this opportunity to make people feel good.” —Herb Alpert

An Evening with Herb Alpert at The Newman Center, Wednesday, September 25th at 7:30pm is brought to you by Singer & Simpson Productions, Miriam Singer and John Simpson from Grand Junction. They are newcomers from Montana who love music and hope to bring more quality music events to Colorado venues. Their website is SingerandSimpson.com.
>
Tickets for An Evening with Herb Alpert are available at newmantix.com/herbalpert or call the box office at 303-871-7720.