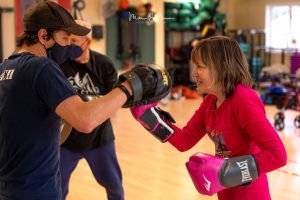 SEATTLE, WA, March 1, 2022 – In celebration of the American Parkinson Disease Association’s (APDA) motto “Strength in Optimism, Hope in Progress,” the APDA Northwest Chapter chooses someone in the local Parkinson’s disease (PD) “family” who exemplifies this motto each year and honors them with the APDA Optimism Award.  This special commemoration acknowledges and honors a person who has inspired their PD community by living life to the fullest. Nominations are submitted by peers, which makes the award truly a grassroots acknowledgment of an individual and their efforts. The APDA Northwest Chapter serves the people of Washington, Alaska, Montana, Idaho, and Oregon with extensive PD resources, programs, support, and a sense of community.

The APDA Northwest Chapter proudly announces the 2022 Optimism Award recipient – Alaska resident and Colorado native Kerry Howard. In 2015, Howard developed a tremor in her hand and was ultimately diagnosed with PD in 2016. After getting over the initial shock of this diagnosis and a period of adjustment, she chose to approach the disease like she approached other challenges in her life — as realistically and positively as possible. Howard quickly discovered that she was not alone in her diagnosis and made connections through PD support groups and exercise classes.  She found meaningful and reliable resources through organizations like APDA which help her navigate this disease, including the APDA PRESS™ program (Parkinson’s Roadmap for Education and Support Services) — a program specially designed for people who have been diagnosed less than five years, which Howard attended remotely during 2020.

“We are constantly inspired by Kerry’s determination and positive outlook,” states Jean Allenbach, Executive Director, APDA Northwest Chapter. “Not only is she working hard to be proactive in her own personal Parkinson’s care and journey, but she is also motivating and inspiring others along the way, and that’s so important.”

Howard’s many accomplishments that led to her selection as this year’s Optimism Award winner include advocating for her Parkinson’s community by being a volunteer, ambassador, and community advocate, working on policy issues, and lobbying Alaska’s congressional delegation about Parkinson’s concerns. She also helped establish the first Rock Steady Boxing program (a fitness program specifically for people with PD) in Juneau, Alaska, and procured funding from APDA NW for this program to go virtual during the pandemic so that people from all over the country could participate. Her friends and PD peers will tell you; she is an optimistic force to be reckoned with!

“Living with PD is a challenge, but it is a disease you can live with, and for that I am grateful.  No one knows what the future holds but I believe in being kind, brave, and grateful. Pessimists may be right more often, but optimists have more friends and more fun” states Howard.

Howard will be honored during the live but virtual 20th Annual APDA Magic of Hope Gala & Auction on Friday, March 11. The event is open to the general public and funds raised will enable APDA Northwest to continue serving the local PD community with support, education, and research that will help everyone impacted by Parkinson’s live life to the fullest. Registration is free at www.apdaparkinson.org/magicofhope. To learn more about APDA Northwest visit www.apdaparkinson.org/Northwest or call 206-695-2905.

About the American Parkinson Disease Association (APDA)
The American Parkinson Disease Association (APDA) is the largest grassroots network dedicated to fighting Parkinson’s disease (PD) and works tirelessly to assist the more than one million people in the United States with PD live life to the fullest in the face of this chronic, neurological disorder. Founded in 1961, APDA has raised and invested more than $226 million to provide outstanding patient services, educational programs, elevate public awareness about the disease, and support research designed to unlock the mysteries of PD and ultimately put an end to this disease. To join us in the fight against Parkinson’s disease and to learn more about the support APDA provides nationally through our network of Chapters and Information & Referral (I&R) Centers, as well as our national Research Program and Centers for Advanced Research, please visit us at www.apdaparkinson.org