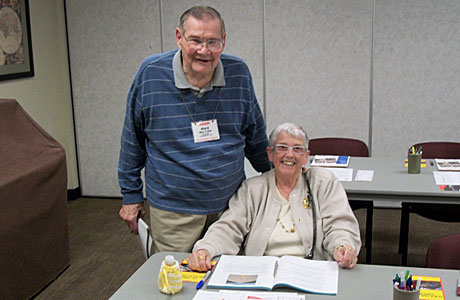 Max Fuller has achieved yet another milestone in his career: he has completed his 600th class and his 20th year as an AARP Driver Safety Instructor. During his 20 years he has had more than 8,600 participants, many whom have taken his class several times. These numbers place Max among the leaders in classes taught. He enjoys teaching seniors, encouraging and helping them to be safer drivers. They also usually receive an insurance discount for completing the class. In 2012 Max was named as the Colorado Driver Safety Volunteer of the year, something that is not new to him, as he also received the 2009 award. Max has always been willing to promote the program to local groups and organizations. He teaches mainly at the Longmont Senior Center, also holding classes at the Kaiser Permanente facility and local churches.

He began his career with AARP Driver Safety after taking a class from an instructor who was leaving the program. He suggested Max start teaching the classes.

Max was Principal at the Career Development Center, the Vocational Technical School in the Saint Vrain Valley School District, and served on the administrative staff at Northwest Missouri State University. He was a secondary teacher (business and driver education) in Iowa and Colorado and also taught at Buena Vista College in Iowa.

In 2006, Max was recognized as a Channel 7 Everyday Hero, an award presented by Channel 7 and Regis University for outstanding volunteerism. In the same year, he received the Longmont Rotary Club Service award for exemplary service as a driving instructor.

Max has also served as an election judge. His hobbies include sports, camping, hiking and walking. Donna, his wife of 62 years,  is very supportive of his Driver Safety Program activities. She was an elementary teacher in Iowa and a teacher’s aide in Colorado. Her interests include crafts, flower arrangements, and gardening.

The Longmont community was very supportive while Max served as the Principal of the Career Development Center. Teaching the Driver Safety classes these last 20 years is one of his ways of giving back to the community.