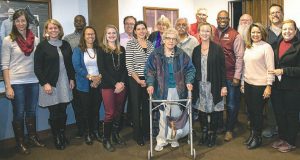 DENVER – On Thursday, 95-year-old Swansea resident and community advocate Bettie Cram was honored for her long-time advocacy of the National Western Stock Show with the unveiling of a new street, “Bettie Cram Drive.”

Members of the National Western Center Citizens Advisory Committee and staff from partner organizations Mayor’s Office of the National Western Center, Colorado State University, Western Stock Show Association, Denver Museum of Nature and Science and History Colorado gathered to cheer for Cram as she unveiled the new street sign on the corner of E. 46th Avenue and Humboldt Street, the future site for the new road.

Born in Niwot, Colorado, Bettie moved to Denver as a young adult looking for work. She held many jobs at the National Western site including working at the Livestock Exchange building. She married a cowboy and raised two daughters in her home in Swansea.

Cram has been part of the National Western Center Citizens Advisory Committee since its inception four years ago, and has been instrumental of shaping the vision of the future campus. She has been an advocate of honoring the Stock Show’s history and western way of life and ensuring the residents of Globeville, Elyria, and Swansea are able to benefit from programming at the future campus.

“I have been in the neighborhood for a long time and I have seen a lot of changes,” said Cram. “I thought, why would I even have a road named after me? Who would ever have thought that? I had a hard time really believing it, but now I wouldn’t give it away for all the pennies in China! That’s my road”!

“We are honored to know Bette Cram personally and celebrate her legacy in the neighborhood,” said Paul Andrews, President & CEO of the National Western Stock Show.  “Bette is as high a quality person as we have on the planet and no one deserves this honor more than she does”.

Colorado State University and the National Western Center
Colorado State University has made a long-term commitment to the reimagining of the National Western Center in North Denver, and the communities surrounding the project. Efforts are under way to create partnerships with community schools, non-profits and businesses, and to actively engage in the community.

A key and founding partner in the National Western Center, CSU will have three buildings within the 250-acre campus upon completion. The project, which will break ground in the coming years, expands and regenerates the current National Western Stock Show site, turning it into a vibrant, year-round experiential, community-centric, life-long learning destination in the heart of Denver.

As Colorado’s land-grant university, CSU’s mission of research, service, and access, fits with the outreach mission of the National Western Center. CSU’s plans at the new campus focus on research and education programming in the areas of food systems, water, environment, energy and health. The university has initiated programming and service outreach efforts before buildings are constructed, as part of its commitment to the area. For additional information, visit nwc.colostate.edu.

Western Stock Show Association
The National Western Stock Show (NWSS) is the anchor event at the National Western Center.  As a founding partner, NWSS is committed to growing the center, its programs and events to become a year-round destination for agricultural innovation and heritage.  The Stock Show will feature state-of- the-art equestrian facilities, stockyards, educational programing and innovative livestock accessibility and functionality.  As a charitable organization, NWSS will continue the mission to provide college and graduate level scholarships in agriculture and medicine for practice in rural areas.

The NWSS is one of Colorado’s preeminent tourist destinations and is held each January for 16 days. The annual event is considered the Super Bowl of livestock shows, as it hosts nearly 20 breeds of cattle throughout the 16-day run.  The event hosts one of the world’s richest regular season professional rodeos, world-class equestrian shows and Colorado’s largest agricultural trade show – all of which attracts more than 660,000 guests each year.  The Stock Show welcomes attendees from 45 states and 30 countries demonstrating not only national but international influences in agribusiness and western heritage.  The Stock Show’s annual economic impact for the City & County of Denver and nearby communities exceeds $100M annually. For more information visit nationalwestern.com