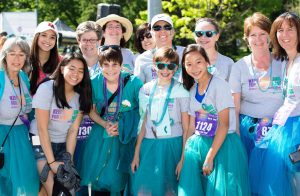 DENVER, Colo. – For the past six years, runners and walkers have poured into Denver’s City Park to flood the paths in teal t-shirts, teal tutus and teal headbands as part of the annual Jodi’s Race for Awareness. Now in its seventh year, the Race, which benefits the Colorado Ovarian Cancer Alliance (COCA), returns to City Park on Saturday, June 11, 2016. Presented by Cancer Treatment Centers of America, this popular community event with its 5k Run/Walk, 1-Mile Family Walk, Family Fun Zone, Furry Friends Dog Zone, expo area and live entertainment will again be emceed by 7NEWS anchor and host of The Now, Theresa Marchetta.

Registration for this year’s Jodi’s Race for Awareness is underway online at www.jodisrace.org, with special early registration discounts available until April 15. Runners and walkers are encouraged to increase the impact of their participation by forming teams with their family, friends and coworkers. A Virtual Run and Ova Sleep option are available for those who can’t make it to City Park on June 11. Great prizes will be awarded to the top fundraisers and finishers and all who participate will receive a teal prize egg.

The Race is named after Jodi Brammeier, a young wife and mother who was diagnosed with ovarian cancer in 2008. Brammeier believed she would have discovered the cancer earlier if she had been more aware of the symptoms. She established the race to raise awareness so that other women might find their cancer earlier and stand a better chance to win against the disease. While Brammeier lost her battle with ovarian cancer on August 3, 2010, her memory lives on in Jodi’s Race for Awareness which has grown to become the third largest race in the country in support of women with ovarian cancer. The Race draws more than 3,000 participants annually and has raised more than $800,000 to support Colorado women affected by ovarian cancer.

Ovarian cancer is the fifth most common cancer in females in the United States and the deadliest gynecologic cancer. An annual gynecological exam does not check for this cancer and there is no specific screening test for ovarian cancer so being able to recognize the symptoms, leading to early detection, is critical to saving lives. The most common symptoms of ovarian cancer are bloating, pelvic or abdominal pain, difficulty eating or feeling full quickly, and urinary urgency or frequency.