75 Year-Old Graduate Motivated To Help Others Realize Their Potential 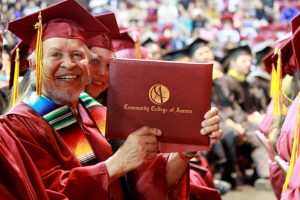 Aurora, CO –  Roland Alarid became the oldest to graduate with the 2016-2017 class from the Community College of Aurora when he graduated on Saturday, May 6 at Magness Arena. At 75 years young, he began taking classes in 2012 after reading Stephen Covey’s book, The Seven Habits of Highly Effective People. “I read the entire book but I was most motivated by Covey’s eighth habit, to find your voice and help others find theirs.” He says he needed direction and Covey’s books helped him. “I got a camera from one of my brothers and I realized I wanted to do something more.” And that’s when his academic journey began.

Alarid said he had to start taking basic classes when he first started at CCA – basic English classes and keyboarding – because he didn’t know the technology at all. “But my favorite class was English because it taught me so much about writing.” He said the Colorado Film School was a “wow” for him because he could get discounted classes offered to seniors, a Pell grant, and graduate with no debt – all motivating factors for him. He thought, “how much more motivation do I need?” Alarid will receive an Associate of Arts degree in Writing and Directing and will start his own business in audio-visual media production and distribution after graduation. He will also carry the distinction of being the oldest graduate from the Colorado Film School at CCA.

“Going to CCA has been such a pleasure,” said Alarid. “The support system I received at CCA and the tutoring were great. It’s been a profound experience. I’ve learned so much about myself and people; I’m still going and growing!”

One of 10 siblings, Alarid grew up in Brighton, Colorado and remembers how his mother would get up early in the morning to make breakfast for the whole family on wood stoves. He remembers working in the fields from the age of six to 14 with his mother where he says he learned his hard work ethic. “Going up and down the rows with the sun beating down on me all day long helped instill in me to work hard.” Then learning the drywall finishing trade from his father from age 14 to 17, Alarid was able to support is own family. In the 1960’s he was finishing dry wall at $1.00 per sheet. “I got so fast that I was making $700 per week!” He proudly says that trade helped him pay off his car, truck, and his house in five year. He admits that his life’s journey has had some ups and downs and he says he’s learned some life lessons along the way.

“I think my parents would be so proud of me,” he said. “I was raised with unconditional love and I’m motivated to help others realize their potential.”

About the Community College of Aurora
The Community College of Aurora (CCA) has campuses at CentreTech and Lowry in the greater Denver area. Equipped with the latest technologies, CCA allows students to study new and traditional programs, while also offering Colorado online classes and degrees. CCA’s service community includes 325,000 people in a 350 square-mile area and CCA’s student population reflects the diversity of this community. The college provides lifelong educational opportunities, prepares the current workforce, and promotes excellence in teaching, learning and service. For more information, visit us at www.ccaurora.edu.