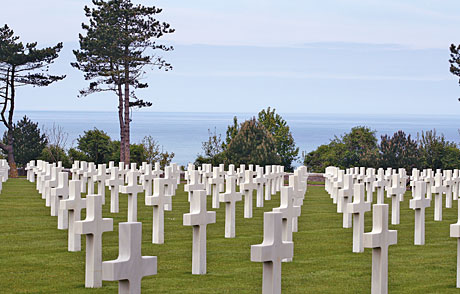 ~ Article and photos by Mary Breslin ~ 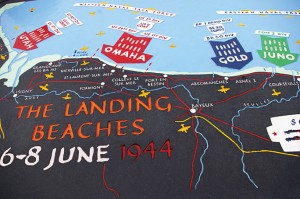 Normandy, France – On Thursday, June 6 much of the world will pause to note the 69th anniversary of the Allied invasion of Normandy, France in 1944. Many of those taking note will be veterans who were there, most of whom are now in their 80s and 90s.

Today, the Normandy coast is an idyllic 50 mile swath of sandy beaches that jut westward toward England at the widest point of the English Channel. In 1944, a 21 mile stretch of those beaches would play a pivotal role in the ultimate defeat of the Axis powers led by Hitler’s Nazi Germany.

Estimates are that nearly 10,000 soldiers died on the first day of the invasion alone. Stormy seas, a heavily fortified coastline and daunting topography at the landing sites would combine to take a brutal toll on the roughly 160,000 troops who participated in the landings.

Firsthand accounts at the various landing sites demonstrate that allied forces faced a variety of obstacles, each offering their own particular brand of hell. Americans landing at Omaha Beach were disgorged into water that was anywhere from waist deep to well over their heads. German soldiers picked off the few who managed to get to shore from their vantage points at the top of the cliffs overlooking the beach. For those who managed to escape the machine gun fire directed at the beach, there were still the steep cliffs to be climbed, and heavily armed enemy soldiers at the top.

Although the British secured their beaches with fewer problems they would quickly run into punishing resistance from German Panzer divisions directly behind the beaches. The British were the only invaders who came face to face with the fearsome tank units immediately after taking their assigned beaches. 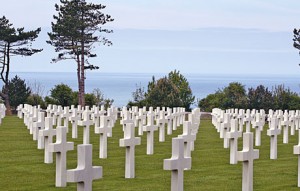 The American cemetery at Colleville-sur-mer overlooks Omaha Beach. Nearly 9,500 Americans are buried there.

There were five landing zones. Utah and Omaha Beaches, at the western end were the responsibility of the Americans. To the east British troops landed at Sword and Gold Beaches and the Canadians landed in between the British at Juno Beach. This particular area of the coastline was chosen for the invasion in part because other potential sites at Le Havre to the east and Cherbourg to the west were guarded by massive German fortresses.

Unfortunately, the area chosen for the Allied invasion was notorious for bad weather resulting in heavy seas, a factor that would weigh heavily in the planning and execution of the invasion and would play a role in many of the casualties suffered.

There are a number of cemeteries throughout Europe specifically set aside for those who died in WW II. The American Cemetery at Colleville-sur-mer overlooks the left flank of Omaha Beach. The neat rows of white crosses and stars of David rest atop a cliff with the English Channel serving as a backdrop. Nearly 9,500 Americans who died in the Normandy region, most of them during the invasion are buried there. Its beauty and peacefulness stands in stark contrast to the fierce fight that once took place there. The land for the cemetery was provided by France through a special land concession and is free of taxes or other charges. The United States government manages the site and is responsible for its upkeep and maintenance. 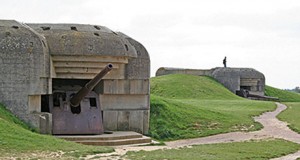 The German gun battery at Longues-sur-mer is a silent reminder of the damage done by this and similar batteries comprising the so-called Atlantic Wall built by Germany in anticipation of an eventual Allied invasion.

Today, a drive along the Normandy seacoast gives testimony that the French have not forgotten the sacrifices made by those who invaded and set the stage for liberation in 1944. There are monuments and memorials at a number of locations, including a life sized bronze statue of General Dwight D. Eisenhower at Bayeux, Normandy, France. Signs point the way to numerous points of interest for those who wish to explore the area and learn more about the invasion. The roads are narrow, but generally well-marked.

Now, 69 years after the invasion, there are visible reminders of the German occupation of Normandy. Along the coast one can still see the remnants of gun emplacements which formed part of the so-called Atlantic Wall. The battery at Longues-sur-mer, high on the cliffs between Omaha and Gold beaches still contains its 150mm cannon, the only guns remaining in the region. Built by the Germans early in 1944 as preparation for an invasion they knew would come one day, the guns were heavily bombed by allied airplanes just before D-day, sustaining little damage. The steel rebar reinforced concrete bunkers were built into the earth and could withstand heavy shelling. However, one of the four guns received a direct hit by an allied war ship on June 6, and was blown apart. The huge gun barrel and other parts of the gun can still be seen protruding from the ground. Ideally positioned as it was, the battery could fire on the allied ships at sea and on troops as they were landing at Omaha and Gold beaches, making the direct hit and the silencing of the entire battery by the evening of June 6 critical for a successful landing. 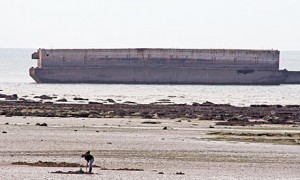 Remains of the Mulberry artificial harbors are in still in place at Arromanches les bains on the Normandy coast. These ingenious devices made it possible to off-load large equipment critical to the invasion.

At Arromaches les bains much remains of the artificial harbors towed into position at the time of the invasion. The so-called Mulberries were critical to the invasion because they allowed large ships to dock and offload smaller transports so that troops and equipment could be brought ashore. The massive concrete Phoenixes, piers, and causeways were built in England and towed by merchant mariners across the English Channel while under fire. Unfortunately, vicious weather arrived again on June 19 and the artificial harbor intended for use by the Americans was destroyed. However, the one intended for use by the British, although heavily damaged, was repaired. Originally expected to last about three months, the remaining harbor was used successfully for nearly nine months, contributing to the success of the invasion.

Driving along the Normandy coast today, with its narrow roads, tiny villages and ancient stone buildings, it is hard to imagine the ferocity of the fighting that once took place there. There is very little open land that is not under cultivation. It seems that every bit of unoccupied land is used for crops or livestock. Watching the sheep with their lambs and the dairy cows with their calves, one can’t help but wonder at it all and think about how different it all might be without the massive undertaking that we call D Day.

Note: Although the beaches of the invasion were assigned to American, British and Canadian troops it should be mentioned that there were thousands of others who participated in the invasion. Troops from all branches came from Australia, Belgium, Czechoslovakia, France, Greece, the Netherlands, New Zealand, Norway and Poland. All suffered casualties and are honored at various memorials across northern France.